She studied at Kobe University, with a year abroad at University of Washington.
There, she was moved by the liberating culture of her peers, how they were who they wanted to be, regardless of the eyes and opinions of others, and gained confidence in being herself in the process.

After she returned to Japan from studying abroad, she made friends with exchange students from the United States through sake.

When she studied abroad, while she gained a new appreciation for the value of Japanese traditional culture, she also felt that the burden was too great for her own voice to project loudly enough by herself.

For example, she loved kimonos, but because it was not a usual thing for college students (expensive and traditional), she had a hard time expressing her fondness, and so she never wore a kimono when going out.

But after her experience studying abroad, she gained a sense of purpose to present traditional Japanese culture with relevancy to modernity as well as connecting “tradition” with “the future.”

CHIKA FINDING HER PASSION FOR SAKE

Chika’s father was a reporter for the local Kobe newspaper and often covered Japanese sake breweries. Because of that, Chika had a closer than usual exposure to sake.

And thus, she was able to bring her foreign exchange friends to enjoy sake brewery tours and enjoy drinking sake when going out.

When she was a student, Chika read all of her father’s articles on local sake breweries. And so, while she was apprehensive, she tried sake whenever she got the chance.

Chika was overflowed with memories of the fun times she’s had in many places as long as there was sake.

THIS THE PRESENT DAY CHIKA – ALL GROWN UP

As she graduated from college and became a member of society, she grew to expand her world views and learned to talk about her hobbies and things she liked with pride, even if they were things she had a hard time freely expressing when she was younger.

As Chika grew up, she gained the confidence to wear a kimono when she goes out more and more. As she saved up her paychecks and slowly got to afford more kimonos, she made friends with people who also have the same hobby.

CHIKA FULLY IMMERSED IN THE WORLD OF SAKE

She began to explore more of the sake scene in Kobe.

As she looked around, she saw a new level of modern connection to traditional culture in sake, as well as the people and places that are bringing sake into the future.

As someone who is a part of the next generation, she is determined to not only show the up-and-coming young people about sake, but to spread the message of fun and happiness filled with smiles that comes with enjoying sake, as she had in her experience, through CHIKA SAKE CUP.

Chika’s father is 49. He works as a reporter for the local newspaper.

Her grandparents were also born in Kobe and own a local bookstore that was popular among the kids in the neighborhood.

Because Chika’s father was always around books growing up, he’s always held an interest in reading and writing. That led to his becoming a reporter.

As time is always changing, he wants to help leave a record of Kobe and its people through his reporting.

Her parents (Chika’s grandparents) are from Kyoto (and still live there), so Chika got to see women from all walks of life, regardless of young or old, wear kimonos in the historic streets of Kyoto.

So even though Chika never saw her mother wear a kimono when she was a young lady in Kyoto, through traveling to Kyoto to visit her grandparents, she saw how the colorful kimonos enriched a part of the lives of the women who wore them.

Chika’s mom is in fact quite delighted to see Chika pick up a part of her Kyoto roots.

Haku is a stray cat who was abandoned near a postal box that’s on the way to Chika’s grandparents’ bookstore.

Chika visits her grandparents’ bookstore often. One time Chika found Haku, and after noticing that no one took care of the cat, Chika eventually adopted it.

Perhaps knowing she has Haku waiting for her at home gave Chika a sense of security and was one of the reasons why Chika was able to branch out and pursue herself when she’s out in the world.

Founded in 1743 in the Nada district of Kobe, Hakutsuru is one of the biggest sake breweries in Japan.

Elegant, thoughtful and delicious sake defines Hakutsuru, but tireless innovation places it in a class of its own. Whether it’s understanding water sources at the molecular level, building a facility to create one-of-a-kind yeast, or developing its own sake-specific rice, Hakutsuru Nishiki, it’s the deep dive into research and development that explains Hakutsuru’s ascension to the top of a centuries-old craft. 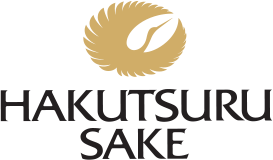 A new way to sip!